Grandfather is fishing for king salmon on the Mercedes, his 40-foot wood troller. The boat rocks beneath his feet; he turns and sees the line jerking down hard. He reels the girdies, and as the lines come up, he sees it: a giant Pacific octopus, a devilfish. It's a monstrous thing with almost human-like skin tinged pink and purple. He unhooks it and it flops onto the deck-hatch and reaches its arms outward. Grandfather hurries aside, backing up against the pilothouse.

Grandfather stays pressed against the pilothouse, watching. The devilfish reaches out, spreading one arm to the starboard side of the boat; another arm reaches across to the port side: a 12-foot beam. The creature touches the water on both sides, feeling its lifeline. Then suddenly, the devilfish pulls its eight arms together, stiffening them, then pushes off, heaving its body overboard. And with hardly a splash, the devilfish descends beneath the surface of the green water.

Grandfather told this story to his wide-eyed son, my father, and my father told it to me. I've told this story to my children, and I'll tell this story to my grandchildren. The creature my grandfather happened to hook on his trolling gear was, in fact, a giant Pacific octopus, the Enteroctopus dofleini, the largest octopus in the world. The giant Pacific octopus can grow up to 30-feet long and typically weigh around one hundred pounds. Of course, there are variations, as some records document octopuses weighing from 100 pounds to as much as 600 pounds. Not surprisingly the Tlingits called the large octopus a devilfish, because that’s the word our elders use; however, the name in the Lingít language is náakw (knockw).


* The rest of this essay can be read in What's Nature Got to Do With Me? from Native West Press. 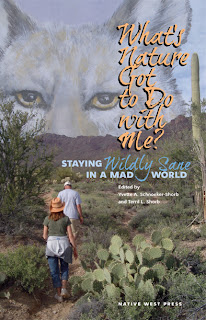 Anonymous said…
Wonderful narrative, Vivian! I love the interaction between Grandfather and the Devilfish, and the sense of reverence and magic. Perhaps I'm projecting... the rare occasions that we catch them, I'm just awed by how smart they are. I'll admit they're tasty, but killing them makes me too sad these days.