The Drop in the Waterfall

Make time to learn the Lingít language. The time is now. 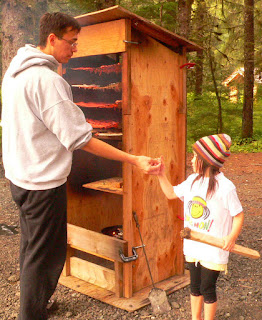 There are some wonderful efforts being made by numerous people to keep the Lingít language alive throughout Southeast Alaska, interior Canada and Anchorage. It is now taught in some schools as well as the university. There are people in a few towns and villages that make community classes available. Your hosts at Planet Alaska have been involved in learning, preserving and revitalizing the Lingít language for almost 20 years. We walk in the footsteps of those who came before us on this path. Nora Dauenhauer, Richard Dauenhauer, Clara Peratrovich, Paul Jackson, George Davis, Clarence Jackson, Walter Soboleff, Emma Marks, Elaine Abraham, Vida Davis, Herman Kitka, Jessie Johnnie, Johnny Marks, Robert Zuboff, Frank Johnson, Frank Dick Sr., Charlie Joseph and many more friends.

When a language is no longer learned by children, we are experiencing language death. By children learning a language I do not mean that these children have memorized 200 nouns and 20 phrases. It is important first steps to learn these things, but there has to be the next step. For a language to live, children need to be immersed in the language from birth naturally speaking it as they grow until they can have conversations about abstract concepts, make jokes, and dream in the language. It is important for the Lingít language to be embedded in our schools, but it is not enough for a language to be spoken only in a classroom. The language needs to be embedded in our communities and used on a regular basis in our homes and out in our public spaces.


There are a few obstacles for people to learn the Lingít language. There are people who do not have access to fluent speakers. There are people who do not have money to pay for college classes. There are people who are intimidated to learn the language because it is a complex language. People are afraid to make mistakes. People are afraid to make the sounds that are not found in any language in the world. People feel that they don’t have enough time to learn it. People are hesitant to learn the language if they are not Tlingit. Many Lingít language learners plateau at a certain level of language learning. I am one of them. The organizations that work towards preservation and revitalization of the Lingít language have obstacles in creating more congruent and connected experiences for lifelong learners. There are no Lingít immersion schools starting with babies that immerse them throughout their childhood. These obstacles and more can be overcome, but we have to hurry. I can’t stress this enough: we have to hurry.

All languages are simply a series of sounds acquired from a direct interaction with people and place around us. If you don’t have fluent speakers directly around you there is a growing number of online resources. I highly recommend checking out X’unei Lance Twitchell’s videos on YouTube. There are more than 170. There is an entire semester of beginning Tlingit on YouTube. You can download Lingít dictionaries for free. There are distant classes available through the University of Alaska that are often in jeopardy of not being offered if they don’t have enough students sign up. Sign up if you can. Come make mistakes with us. Mistakes are how we learn. The funky sounds found in our language are fun. I have found Lingít language classes to be full of laughter.


Make time to learn the Lingít language. The time is now. If it is hard to start big then start small. Start where you are with what you have. If you only have five minutes a day then start with fuve minutes. Five minutes will grow to 10 minutes which will grow to an hour which will grow to a way of life. As soon as you learn a word begin to share it with others. Languages are fine to learn on your own but we speak in order to communicate with others. Speak the language in your community with your community.

One of the most important things we can do for the survival of the Lingít language is give it to the children. Give the language to the children in the stores, in the streets, in schools, in churches, in playgrounds, in homes, on the TV, on the radio, in our homes, and from the mouths of everyone who live here in Southeast Alaska on traditional Tlingit land. All waterfalls start with a single drop. Become a drop in the waterfall of Lingít revitalization today. Join the Lingít language revolution. It starts with one word at a time.

Teikweidí My Tlingit name is Yéilk’, or Little Raven. My English name is Vivian Mork. I am of the Raven moiety. I am a member of the T’akdeintaan clan (black-legged kittiwake). I am from the Snail house. I am a child of the Teikweidí (brown bear). I am a grandchild of the Kaagwaantaan (wolf). I am Sáami and Irish.  I am a child of the Hawaiian and Norwegian. I was born and raised in Wrangell, but my kwáan comes from Hoonah. 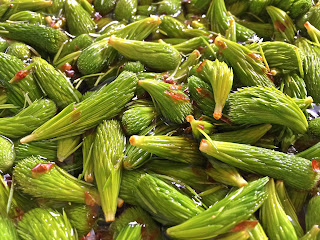 Spruce Tips: A Touch of Spring in Winter